The results presented in this case study are preliminary. All models rely on available and accurate data, tools using these models for application should be viewed in light of the assumptions used for the scenarios
and some of the data limitations.

Overall Goal: Produce a pathogen visualization of inputs to the environment and to surface water to support sanitation decision making, resource prioritization and allocation.

Complex sanitation issues challenge Kampala City, Uganda, as its population and economy continue to expand rapidly. To help the Kampala Capital City Authority (KCCA) prioritize decisions for improved sanitation in the city, pathogen emission maps were developed using the Pathogen Flow and Mapping Tool. The outputs of the tool provided a visual representation of the level of pathogens released into the environment based on sanitation coverage in order to decrease the amount of disease-causing organisms in the environment (on land and in water).

KCCA had key questions regarding the citywide data which if answered could guide their planning. These included:

The tool was used to help identify parishes that have higher pathogen emissions (i.e., hotspots). These areas can then be prioritized for sanitation improvements. In addition to identifying high emission parishes. The PMT provides information on the most effective sanitation interventions for the city. The case study evaluates the most practical and effective interventions identified by the users and this evaluation can be used to assist KCCA’s sanitation decision making for on-site systems. By running the tools with a series of scenarios to address key questions, different sanitation improvements and the magnitude of their effects were addressed.

This case study report focuses on using the tool for sanitation decision making as it relates to KCCA’s sanitation priorities. The third section of the report outlines the inputs into the tool and the assumptions that were made when using the tool. The fourth section shows the results for the current situation. The fifth section presents three hypothetical sanitation management scenarios to illustrate how the tool can help with sanitation prioritization efforts. The sixth section compares mapped data from known zones where cholera outbreaks have occurred in Kampala with sanitation coverage and pathogen emissions.

Inputs for the Pathogen Flow and Mapping Tool

Sanitation data from KCCA’s survey for each parish of Kampala were compiled and used as inputs for the tool.

Rotavirus was chosen as a representative pathogen because of its importance in childhood diarrhea and because viruses as a group are of specific concern due to their high concentrations in sewage and persistence. The population of Kampala is assumed to have rotavirus prevalence and shedding rates that do not fluctuate across the city and are currently based on the literature not necessarily specific to Uganda.

The tool considers the following inputs:

Several assumptions were made for the manipulation of sanitation and other tool input data provided by KCCA to create the baseline scenarios:

Table 1 provides summary statistics for the inputs considered in the model based on the aforementioned assumptions.

Table 1. Summary statistics of PMT inputs for the percentage of residential sanitation systems by type across all parishes in Kampala (in %)

1Note that the amount that remains in the septic tanks refers to what is retained in soak pits. This retained fraction could well be leaching to the groundwater, which is not accounted for in the model.

Figure 1 illustrates the current estimated rotavirus pathogen emissions (as virus particles per year) across the city of Kampala based on residential sanitation coverage. When the color moves towards the dark red/black, this means that there are higher pathogen emissions to the environment. Residential emissions were greatest in the western, eastern, south-central and northwestern districts of Kampala (driven by population and the type of septic tank use). These parishes, indicated in the darkest shades of red, should be prioritized for on-site sanitation improvements to reduce pathogens from household sanitation systems. These areas could also likely benefit from increased access to public toilets for households to use. 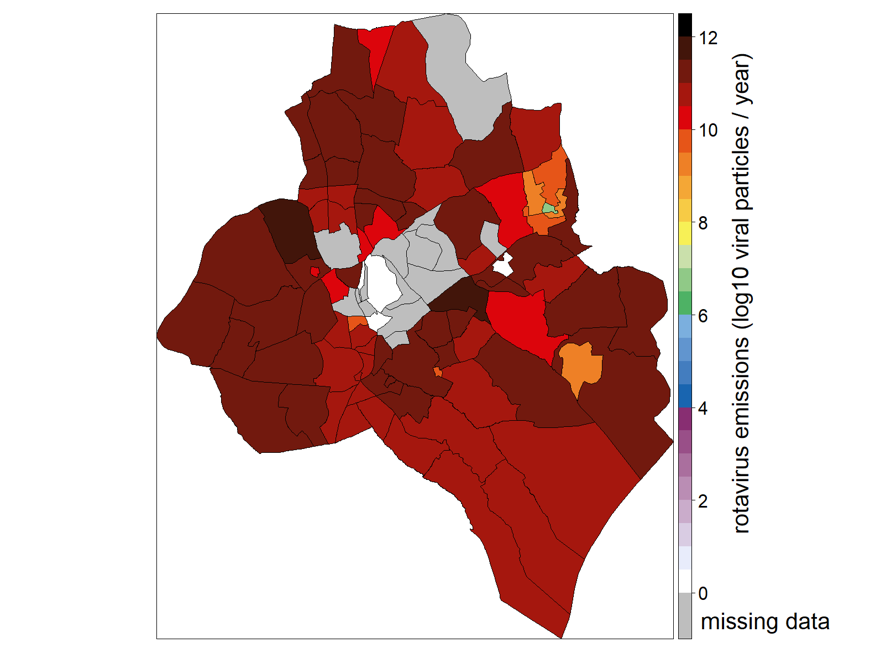 Using the KCCA sanitation survey, tool inflow data were also compiled for public and institutional sanitation facilities. Public areas included parks and markets. Institutions include public facilities like schools and hospitals and private institutions such as hotels. The number of people in each parish was based on the residential population, that population was distributed into the different facilities based on the capacity of the institutions and the emissions were then determined by percent based on the sanitation technologies used at these institutions. Pathogen emissions from public sanitation systems (Figure 2a) are highest in the western and northwestern districts of the city when considering areas with available data. These areas would likely benefit from the construction of additional public toilets with watertight on-site containment technologies and frequent emptying. Instead of constructing toilets equitably throughout the city (two per parish) more benefits may be seen if the parishes indicated in dark red in Figures 1 and 2 receive more public toilets than those shown in yellow or white (denoting fewer pathogen emissions). Institutional emissions (Figure 2b) follow a pathogen emission pattern similar to residential emissions – western, northwestern, south-central and eastern parishes emit the greatest number of pathogens to the environment. An example of such a parish is Lubya, where in particular flushing unlined pits, but also open defecation, strongly contribute to high emissions from residential, public and institutional facilities.

The following section presents three scenarios to illustrate what some incremental improvements in sanitation can do to reduce pathogen emissions in certain parishes across the city of Kampala. The scenarios include:

In each of these scenarios, the baseline map will be shown in panel a), panel b) shows the results of the scenario, and panel c) shows the difference (or change) between baseline and the scenario being evaluated. Figures 4-6 show the three scenarios above. When the color from map a becomes lighter in map b, or when the color in map c becomes blue, this signifies a reduction in pathogens reaching the environment.
Scenario 1. Ending open defecation (OD)

Figure 4. Baseline residential rotavirus emissions from household sanitation systems (a) compared to a scenario where open defecation is eradicated throughout the city (b) and the difference (c) between the scenarios.

In Figure 5, replacing all pits (both unlined and lined, but not watertight) with lined watertight pits (that are emptied once every 3 years), has a great impact on reducing pathogen emissions for the majority of parishes throughout Kampala. Five parishes move to no emissions while the majority of those remaining are reduced by at least one color-scale, indicating a 0.5 log (63.4%) improvement in the number of pathogens released into the environment. The only emissions left were those of flushing septic systems, open defecation and the wastewater treatment plants in the parishes Kasubi (Lubigi treatment plant) and Industrial Area (Bugolobi treatment plant). The latter is the only parish where the emissions increase. This exemplifies the need for efficient sewage treatment in those areas. The five parishes with the greatest reductions in emissions in this scenario (shown in Figure 5c) are Kawempe I, Kasubi, Lubya, Mutungo, and Kyebando.

Figure 5. Baseline residential rotavirus emissions from household sanitation systems (a) compared to a scenario where all unlined and lined (not watertight) pit latrines were changed to lined watertight pits (b) and the difference (c) between the scenarios. Parishes with emission changes were not highlighted in (b) since the number of districts with reductions caused some parishes without reductions to be appear highlighted due to improvements in their neighbors. To avoid misinterpretation, the map was not marked as done in the previous scenario.

Scenario 3. Increase proportion of latrines emptied and fecal sludge delivered to treatment by 50%

Figure 6 presents a scenario illustrating a 50% increase in the proportion of latrines that are emptied and conveyed to treatment. The scenario assumes that 50% of the waste that is currently flushed into the environment from pit latrines is now emptied and treated once every three years. The greatest reductions in pathogen emissions appear in the western, northwestern, south-central, and eastern parishes of the city. These parishes could see a reduction in pathogens reaching the environment by increasing the number of households that empty their toilets. KCCA’s interventions such as awareness campaigns and incentivization for households to empty their latrines may be best promoted in areas where a reduction in emissions could be the highest (areas in black in Figure 6b). Specifically, as shown in Figure 6c, the greatest reductions in emissions from increased emptying occur in Kawempe I, Kasubi, Lubya, Mutungo, and Kyebando.

Figure 6. Baseline residential rotavirus emissions from household sanitation systems (a) compared to a scenario where the proportion of total pits emptied and conveyed to treatment in each parish is increased by 50% (b) and the difference (c) between the scenarios.

KCCA identified five parishes within Kampala that were prone to cholera outbreaks in 2019. Using the pathogen mapping tool, it seems that four of the five parishes (Figure 7. Kabowa, Namuwongo, Bukasa, and Mbuya I, delineated with thick black lines in the above maps) have the second highest level of pathogen emissions Mbuya II, the fifth parish had slightly lower emissions levels. It appears that there could be some relationship between poor sanitation coverage and pathogen emissions in these parishes that are contributing to the transmission of cholera. More years of data on cholera outbreaks could further this analysis. Accordingly, sanitation intervention efforts in these high emission areas may help to reduce cholera transmission. 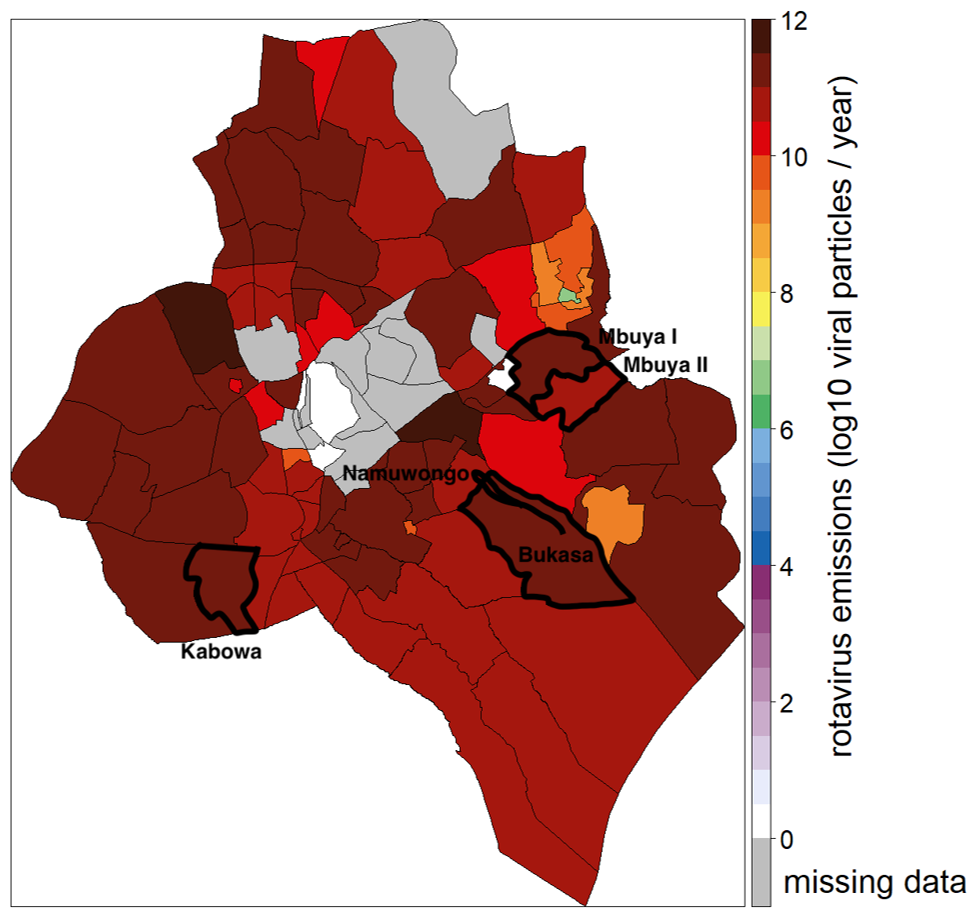 KCCA has invested in significant data collection. This has allowed for the analysis and use of the Pathogen Flow and Mapping Tool. Many parishes in the central region of Kampala, however, have no data from which emissions maps can be made. Accordingly, mapping results and the implications of the scenarios are somewhat limited because they do not encompass all of the parishes in the city. Better resolution of the data will better inform the sanitation decisions being made by city authorities, and while additional data should be collected, given the current information, a preliminary sanitation plan can now be developed. All data and their interpretations should be considered in light of the assumptions stated at the beginning of the case study. The utility of the maps is in the comparison of the baseline maps to the scenarios (the relative change). Decision makers should not focus on the absolute log emissions in these maps as there is uncertainty around the inputs into the models.

The Pathogen Flow and Mapping Tool is useful for sanitation planning. It provides a visual representation of pathogen emissions to the receiving environment and allows users to model the impact of sanitation interventions on pathogen emissions. The maps produced by the tools can inform decision makers of hot spots and areas of priority for intervention efforts.


Acknowledgements: KCCA has been a valued stakeholder and partner in development of this case study. They have provided the sanitation data and have been integral to the advancement of the scenarios. The K2P project is funded by the Bill and Melinda Gates Foundation.