The Pathogen Flow Tool (PFT) predicts the reduction and flow of pathogens (viruses, bacteria, protozoa and helminths) through onsite sanitation and centralized treatment systems to support the selection of technologies and interventions

Application of the PFT: Modeling a Case Study in Kampala, Uganda

The Pathogen Flow Tool is a sanitation decision support tool developed by the Knowledge to Practice (K2P) team from the Global Water Pathogens Project (GWPP). It uses a model to predict the fate and transport of pathogens throughout a sanitation service chain, based on user inputs about sanitation technologies, behaviors, and practices, as well as data from the scientific literature. The PFT allows the user to run scenarios to evaluate the impact of a proposed intervention or treatment system upgrade on pathogen reduction in the system. In this case study, the use of the PFT was demonstrated in Kampala, Uganda, in collaboration with the Kampala Capital City Authority (KCCA), the National Water and Sewerage Corporation (NWSC), and the Ministry of Water and Environment (MWE).

The results showed that interventions to improve onsite sanitation facilities (e.g., ending open defecation, providing basic sanitation for all, and lining the pits of dry toilets) are extremely important for controlling predicted pathogen emissions to the environment. Implementing these interventions alone would eliminate more than 1016 pathogens from reaching the environment each year (approximately 13% of what’s excreted). Addressing the needs for improvements of onsite sanitation services and other interventions, such as increasing the percentage of households that safely empty and convey faecal sludge to treatment plants, may seem to have only incremental gains at first, but nevertheless it is very important. Once compliance approached ~100% in the model simulations, tremendous payoffs were seen in terms of the predicted overall pathogen reduction throughout the entire sanitation service chain. Onsite sanitation interventions eliminated emissions to surfaces in densely populated urban settings but then, as seen in the Pathogen Mapping Tool (PMT) case study (link), will eventually concentrate pathogen emissions to locations where the treatment plants are discharging effluent and applying biosolids.

To address this, potential upgrades to the Lubigi Sewage and Fecal Sludge Treatment Plant were evaluated. This plant is one of several centralized treatment plants serving the greater Kampala region, and it currently receives sewage and faecal sludge. The faecal sludge is treated in a sedimentation basin, and the settled solids are further treated in covered sludge drying beds. The liquid overflow from the sedimentation basin is mixed with incoming sewage and this mixture is treated with three anaerobic ponds in parallel followed by two facultative ponds in parallel. Sludge from the stabilization ponds is removed annually and treated in drying beds. Liquid effluent discharges to a system of wetlands that feed Lake Victoria, and dried sludge biosolids are picked up by farmers after a holding time of approximately 30 to 40 days, depending on supply and demand.

Figure 1a shows the estimated pathogen reduction efficiency of the treatment plant under the different scenarios, and Figure 1b shows the estimated annual loading of pathogens in the treated liquid effluent and in the sludge biosolids. Results from the model simulations showed that each of the three upgrades to the Lubigi Treatment Plant (having the ponds operating in series; adding maturation ponds to treat the effluent of the facultative ponds; and increasing the holding time of sludge in the drying beds to 90 days), had different impacts on the different pathogen groups. Interventions targeting the stabilization ponds (Scenarios 1 and 2) mostly impacted the predicted reduction of viruses and bacteria but did not improve the reduction of protozoa and helminths. The intervention targeting the sludge drying beds (Scenario 3) mostly impacted the predicted reduction of protozoa and helminths but did not improve the reduction of viruses and bacteria. Only Scenario 4 (the intervention targeting the ponds and the sludge drying beds) improved the reduction of all four pathogen groups. According to the model outputs, Scenario 4 could provide a 1.5- to 2.0-fold increase in the overall pathogen reduction efficiency at the Lubigi Treatment Plant, preventing ~1.5 to ~2.2 trillion pathogens from contaminating surface waters and farms each day (on average). Viruses and bacteria, due to their smaller size and high buoyancy, tend to be more associated with liquid waste streams, while protozoa and helminth eggs, due to their larger size and greater settleability, tend to be associated with sludge/biosolids. Therefore, to reduce the concentrations of all pathogen groups, it is necessary to upgrade processes associated with the treatment of both the liquid and the solid fraction of wastewater and faecal sludge. 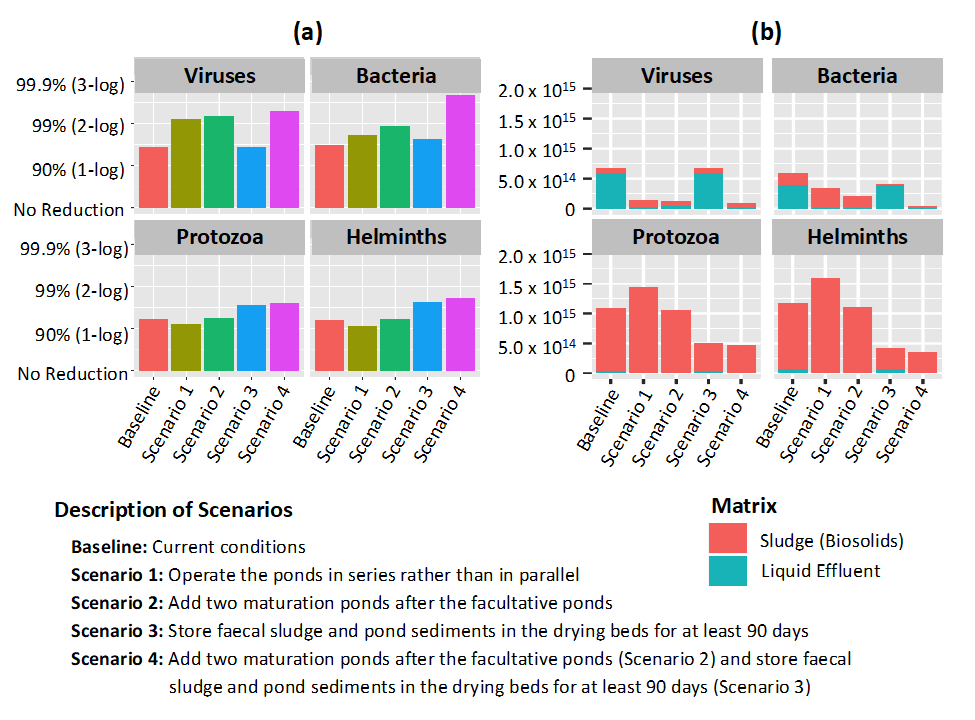 Figure 1. Summary of outputs from the PFT showing: a) the predicted pathogen reduction at the Lubigi Treatment Plant; and b) the estimated pathogen loadings in the liquid effluent and sludge biosolids for the different scenarios evaluated.

Overall, the following results based on use of the PFT for this case study were found:

Acknowledgements: NWSC and KCCA have been valued stakeholders and partners in development of this case study. They have provided the sanitation data and have been integral to the advancement of the scenarios. The K2P project is funded by the Bill and Melinda Gates Foundation.