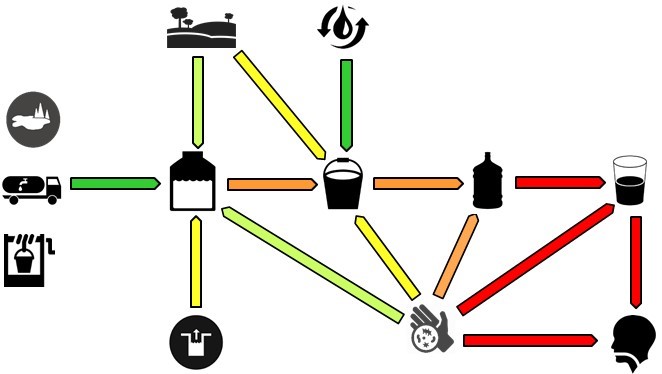 People living in rural communities located in the semi-arid region of North East Brazil, face several health issues, common to those living in many other low-income communities around the globe. Water scarcity, combined with lack of awareness about the need for 'safe' handling, storage of drinking water and poor hygiene appear to contribute significantly to the microbial contamination of water from source-to-mouth. Contamination may occur at several critical-points within the domestic environment within these communities. Understanding the contribution of the different routes of exposure is necessary to support effective risk management. The consumption of drinking water containing pathogens can lead to numerous diarrheal diseases and is one of the leading causes of childhood mortality and morbidity in the world (WHO, 2017). The following case study illustrates how a tiered approach to Quantitative Microbial Risk Assessment (QMRA) can be applied to provide objective information with which to identify priority areas for risk management of multi-sourced rural water supply systems.

The purpose of the QMRA was to provide an evidence-base for effective management of the health risk associated with the different water contamination routes in this rural community. The specific risk assessment objective was to:

The scope of the study was defined by the following steps:
Hazard identification: Norovirus, Salmonella spp. and Giardia lamblia were selected in this assessment because these pathogens presented higher prevalence levels in feces of patients with symptomatic and asymptomatic diarrheal infections in rural Brazil. It is important to mention that both Salmonella spp. and Giardia lamblia can also be shed and spread by several domestic and wild animals, which were also common in the rural settings studied. All selected pathogens presented high health significance and moderate-to-long persistence in water supplies.

Exposure pathways: Drinking water originated from multiple sources, including tankered water (from both surface water and groundwater sources), rainwater, and desalinated water (groundwater), which was stored in water storage reservoirs (cistern) and/or within household drinking water storage containers. Treated (as reported by residents) and untreated waters were also evaluated during the study.

Information relating to the water supply system, sanitation and hygiene was gathered through questionnaires, which were conducted face-to-face with the residents. Sanitary surveys were also conducted during the field survey. Data provided by the Brazilian health authorities, as well as from the literature were also used during the formulation of the exposure assessments. A monitoring program was also developed to quantify the level of fecal contamination through the detection and enumeration of E. coli. Figure 1 illustrates the conceptual scenario model developed, including the water, microbial and ingestion routes identified in this study.

3.1. Drinking water (I1) and hand-to-mouth (I2) exposure
The exposure dose for the drinking waters (I1) from different sources was estimated based on E. coli concentrations, and was described with triangular distributions (Table 1). The first and third quartiles of E. coli counts observed at each step of the water supply chain (origin, water storage reservoir and in-house drinking water storage container) were used to represent the minimum and maximum values, whereas the median was assumed to be the mode of the distribution. For the hand-to-mouth route (I2), a triangular probability density function (PDF) was created for the microbial load on both hands, based on a study undertaken by Pickering et al., (2010).

These E.coli concentrations were translated to concentrations of the target pathogens in the different drinking waters and on hands by the formulas and data described in the annex.

3.2. Intake and dose
In the household, hygiene during taking of water from the storage container to drink (microbial pathways 17 and T9) were considered to contribute to the microbial contamination of drinking containers, and therefore, to the final ingestion dose through the drinking water route. Most of research in the literature reported that the mean intake of water per person varies between 1.10 and 1.50 liters per day (Williams et al., 2001). However, a higher volume was adopted in this study because it was expected that people in the semi-arid region would drink more water. Moreover, based on the fact that people normally drink water at various intervals throughout the day and the contamination of drinking containers (DC) was considered in this assessment, the risk of infection was based on the ingested dose per event rather than the daily intake of water. The ingestion dose for the drinking water and the hand-to-mouth routes were estimated based on the formulas 1 and 2, respectively.


The number of hand-to-mouth touching events per day was assumed to be ten, based on the findings of a recent research undertaken in rural Accra, Ghana (Antwi-Agyei et al., 2016). However, another triangular PDF was created to include uncertainty on the daily number of events that someone consumes water in this analysis. This PDF was assumed to have a minimum of one, maximum of ten and mode of six events per day.

A Beta-Poisson model was used to assess risk posed by Salmonella spp. and norovirus, whereas risk of infection posed by Giardia lamblia was performed using the exponential dose-response model. The dose-response models and their respective parameters were adopted from the Centre for Advancing Microbial Risk Assessment (CAMRA, 2015), and are summarized in Table 2.

aLD50/ID50 = Lethal Dose 50 / Infectious Dose 50 = The amount of microorganisms that is sufficient to kill 50% of a population; bα = parameters of the beta-Poisson distribution; cK = survival probability, N50

The probability of infection per person per year was stochastically estimated by combining the ingestion dose for each scenario variant with the dose-response model and performing simulations with 10,000 iterations using the Latin hypercube sampling technique.
The risk assessment applied to all water sources identified in the rural communities, considering the proportional volume of use of each source, resulted in a high risk of infection for all TP: Salmonella spp. (4.0 x 10-2), Giardia lamblia (6.2 x 10-2) and norovirus (one), compared to the maximum level of risk (10-4) suggested by the US-EPA guidelines. The hand-to-mouth route was observed to pose a slightly lower risk compared with the drinking water route for Salmonella spp. (1.1 x 10-2), Giardia lamblia (3.7 x 10-2) and norovirus (8.0 x 10-1), but still represented a significant level of risk to human health.

The assessment of the three most used water sources for drinking (desalinated water, harvested roof run-off rainwater and tankered water) indicated a moderate to high risk for all microorganisms assessed in this study (as shown in Table 3). Unexpectedly, desalinated water presented higher risk for both Salmonella spp. and Giardia lamblia compared to harvested roof run-off rainwater (HRRW) and tankered water (TW). This was very likely caused by the inadequate transportation, handling and storage of drinking water.

Table 3. Median annual risk of infection per person for the population consuming the various available water sources in the rural communities studied

The risk assessment of the different types of drinking water treatment (reported by consumers) showed that consumers using ceramic candle filters had a significantly lower risk of infection by Giardia lamblia and a slightly lower risk for both Salmonella spp. and norovirus, when compared to users consuming non-treated or chlorinated water (Table 4). Although it was expected that Salmonella spp. and norovirus would be removed more effectively by chlorination compared to ceramic filtration, it was observed that users that reported to use chlorine tablets to treat their drinking water prior consumption were inadequately applying it (or not using it at all), mainly because of taste and/or odour issues.

Table 4. Median annual risk of infection per person for the population consuming non-treated and treated (chlorination and filtration) drinking water in the rural communities studied

The QMRA outcomes were very helpful for identifying the most useful and appropriate risk management strategies for use within the rural communities in semi-arid regions of Brazil. The high risk of infection (especially for norovirus) observed in this study, even in desalinated water stored within the drinking water container showed that microbial contamination was happening at the household level and that was nullifying the effect of water treatment. So more effort should be directed towards raising awareness among local inhabitants with regards to water, sanitation and hygiene issues within the domestic environment.

It was also recommended that the use of ceramic candle filters should be promoted because of their high level of social acceptability, observed efficacy in reducing microbial contamination of drinking water and consequently in reducing the risk of diarrheal disease. Moreover, it was recommended that these filters should include an activated carbon component to enhance the social acceptability of a previous chlorination step within the water storage reservoir. Finally, the study also suggested that the Brazilian health authorities need to do more to direct efforts to raise awareness and educate local residents with respect to water, sanitation and hygiene.

The approach to risk assessment performed in this study provided valuable quantitative information to suggest that rural populations living in the semi-arid region of North East Brazil were at a high risk of infection by locally relevant pathogens, independently of the water source used. This assessment showed that even desalinated water can be highly contaminated by the time it reaches the drinking water storage container, and therefore, that the transportation, handling and storage of drinking water should be done carefully and safely. Finally, the QMRA approach adopted here helped facilitate understanding of a complex water supply system, in which consumers often received water from multiple sources.

Formulas F1, F2, F3 and F4 were used to estimate the daily contribution of E. coli and target pathogens in various sources of contamination and are presented below:

Note: The number of organisms excreted per year assumes that people defecate a daily average amount of feces with constant concentration of E. coli.

The reported amount of precipitation over twenty-four hours was divided into ranges of days with precipitation events, to estimate the microbial load contribution from land surfaces to water storage reservoirs and from roof run-off to cisterns, as this contribution is heavily dependent on the number of rainfall events associated with its intensity. An exponential decay model (Cf = Ci x e-kt) was used to estimate the decay of microorganisms in many critical-points along the water supply system. A summary of the formulas and assumptions used to estimate the number of E. coli and target pathogens in intermediate cross-contamination critical-points and water sources is presented in Table A1 and A2, respectively.

Table A1. Formulas to estimate the number of E. coli and target pathogens in intermediate cross-contamination critical-points water sources


Table A2. Formulas to estimate the number of E. coli and target pathogens in water sources

The hazardous events contributing to change in water quality from water storage reservoirs (WSR) to in-house drinking water storage containers (DWSC) along the water supply chain were assumed to be equal for every scenario variant created. The microbial load within WSR’s was assumed to originate from hazardous events associated with microbial routes 10, 11 and 13 and from water sources (T3 and T4, separately, or combined). Four hundred square meters of land around the WSR were assumed to contribute to the microbial contamination of it. A decrease of six log10 and seven log10 were assumed for the microbial contribution from land surfaces and soakaways, respectively. Finally, T3 was assumed to contribute to the microbial contamination of WSR’s four times per year, as residents reported receiving water from these sources between one and four times per year. The combination of the formulas presented in Table A1 resulted in the formula F5, which was used to estimate the daily input concentration of microorganisms in WSR’s.


Transport containers (TC) (e.g. buckets) were assumed to receive microbial loads from hazardous events associated with microbial routes 12, 14, T6 and T7. One percent of microorganisms within an area of one square meter was assumed to contribute to the contamination of transport containers. Moreover, a reduction of two log10 for all microorganisms was assumed. Formula F7 was developed to estimate the concentration of target pathogens within in-house drinking water storage containers, which were assumed to receive pathogens loads from microbial routes 16 and T8.