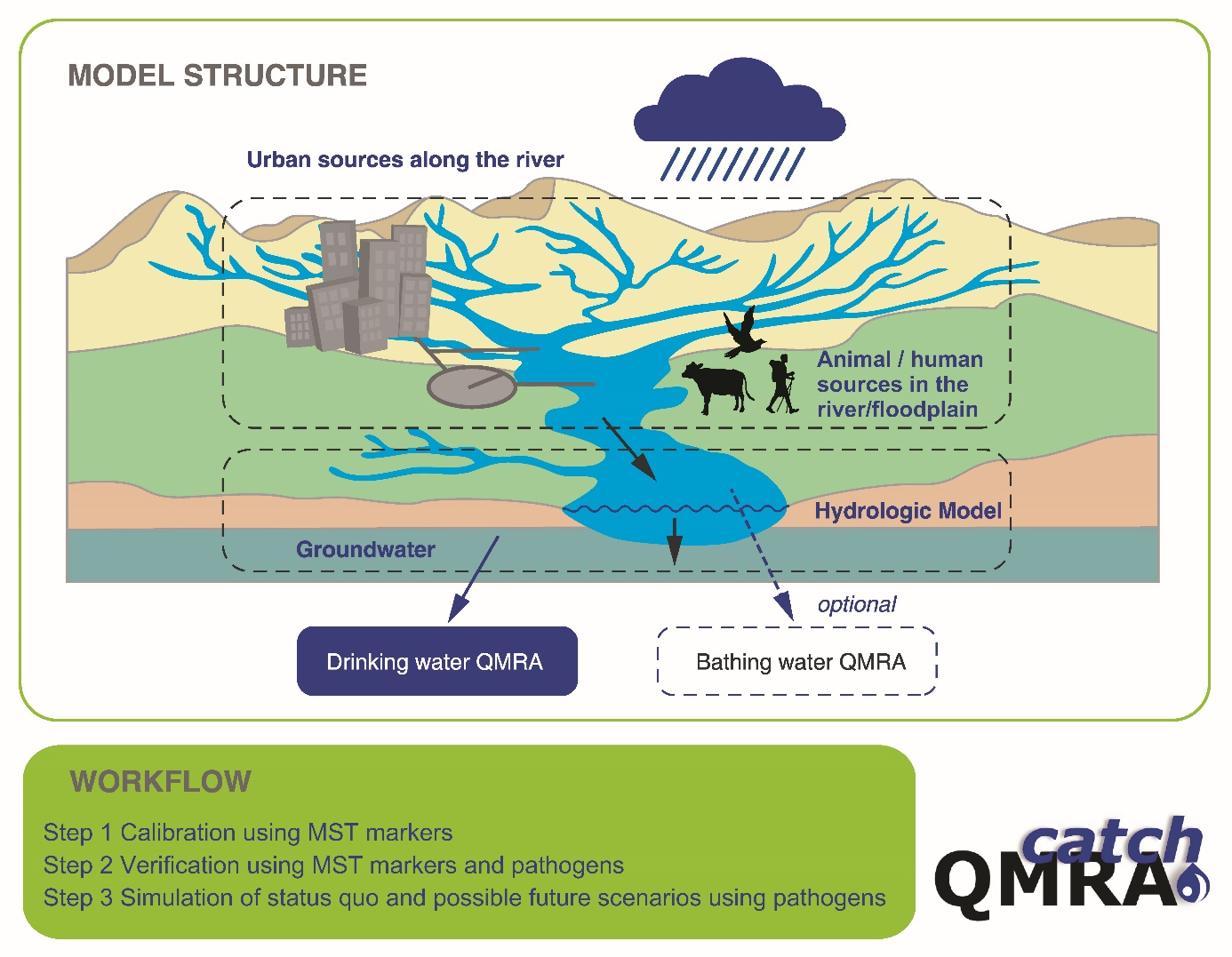 The case study addresses high level experts and water supply managers. The objective was to determine the needed pathogen reductions during riverbank filtration (RBF) and final disinfection so that safe drinking water production can be guaranteed for the future. An approach integrating QMRA with hydrological process modelling that is driven by microbial source tracking (MST) and virus data is presented with the recently developed computational tool QMRAcatch (free download at: www.waterandhealth.at).

The case study site is located at the Danube River in Austria and a river/floodplain area with important drinking water resources, serving also as important recreational area for the City of Vienna (300 thousand visitors per year). The study site can be regarded as a model area to study RBF systems in particular when conflicting land/resource utilisations do exist.

Several municipalities located upstream of the study site discharge biologically treated wastewater into the Danube River that include sporadic combined sewer overflows. The urban drinking water is produced from a well series after treatment by the RBF system and additional disinfection. Besides the impact from the Danube River, visitors and wildlife faecal pollution have potential impact on the microbiological water quality in the floodplain area.

The outcomes consist of the assessed faecal pollution burden and the needed virus reduction level by treatment of river source water to reach safe drinking water.

Read more? Scroll down for a more detailed description of this case study

Riverbank filtration (RBF) is an important method for drinking water production worldwide. Upstream discharges of treated or untreated wastewater in densely populated areas or diffuse pollution from agricultural and wildlife wastes can cause a health burden from faecal pollution in rivers. Despite RBF is considered very effective in reducing microbes and viruses, changes in river flow rates or precipitation can cause diminished treatment efficiency (Derx et al., 2013). Pioneering ways of protecting water resources in the 21st century, the World Health Organization (WHO) proposed the source-to-tap approach including infection risk assessments based on health targets (WHO, 2011). A basic requirement for this approach is to assess the source water quality based on multi-parametric data sets and to develop catchment-specific fate and transport models. Modelling the status quo and future scenarios allows predicting impacts of future changes on water safety, e.g., urban population growth and changes in hydrological regimes induced by global warming. Possible strategies to mitigate these risks include further disinfection of biologically treated wastewater, the building of storm water reservoirs and green infrastructure, and an improved sanitation infrastructure.

This case study highlights a quantitative microbial risk assessment (QMRA) integrated with hydrological process modelling using QMRAcatch for drinking water resources located in a large river/floodplain area (Derx et al., 2016; Schijven et al., 2015). The presented approach addresses the sustainable development goal (SDG) 6.3 to prioritize on where and how to reduce the pollution. A source targeted monitoring campaign including microbial source tracking (MST) and enterovirus was conducted addressing SDG 6.5 to implement integrated water resource management at all levels. The monitoring data was used to inform and test the model for predicting levels of human faecal pollution in the river and the required treatment for safe drinking water production.

The purpose of the QMRA was to determine robust reduction levels of pathogens for safe drinking water production. The criteria are here defined as the required virus log-reduction by RBF and subsequent disinfection to achieve the health-based target.
The scope was defined by:

In order to determine the required virus removal by RBF and further disinfection for safe drinking water production, dose-response models were used. The dose response model for norovirus and enterovirus is the hypergeometric dose response model (Schijven et al., 2015; Teunis et al., 2008). It accounts for beta-distributed infectivity levels of the viruses and for Poisson-distributed virus particle numbers for the dose estimation. For enteroviruses, the dose response relationship is associated with the enumeration of infectious virus particles, as enumerated in the tissue culture. In the case of norovirus, the dose response model was developed based on PCR enumeration, which includes non-infectious virus particles (Teunis et al., 2008).
Low and high pollution scenarios were defined by changing groups of model variables. The scenarios and the current situation were investigated for a dry year and a wet year with the calibrated model (Derx et al., 2016). In the simulations, the precipitation amounts and discharges from the Danube River and the floodplain river were taken from observational data in 2003 and 2002 because the lowest and highest mean annual discharges from the Danube River since 1996 were recorded in these years (Anonymous, 2014). The low pollution scenario was characterized by a low number of visitors contributing to human faecal pollution and a low probability of defecation (Phum) in the floodplain area. The high pollution scenario was characterized by a high number of visitors and a high Phum in the floodplain area (Derx et al., 2016). The runoff coefficient was set to 0.1, and the ratio of evaporation to precipitation was set to 0.4 according to Merz and Bloschl, (2009). The viral release rate from faeces depends on the intensity of rainfall. This model variable was adjusted for an extremely dry year and an extremely wet year during the calibration (2012 and 2013), and then varied accordingly in the scenarios for the wet and dry years (Table 1), (Derx et al., 2016).

For assessing the infection risk, the 95th-percentile enterovirus and norovirus concentrations in the Danube were calculated. The log10 reductions were then calculated to determine the virus removal necessary by RBF and further disinfection to safely produce drinking water at the point of water intake (Derx et al., 2016). For all scenarios, 106 Monte Carlo samples were processed. The drinking water wells take up a mixture of Danube River water, floodplain river water, and floodplain water with mixtures assumed for the dry and the wet years according to Taschke et al., (2014) (Table 1).

The simulations showed that 4.5 log10 and 6.6 log10 (95th percentiles) reductions in enterovirus and norovirus, respectively, must be achieved by RBF and disinfection to reach the health target (Derx et al., 2016). The results of the low and high pollution scenarios showed that the required virus removal ranges from 0 to 8 log10. According to the simulations, the drinking water quality according to the health-based target can be achieved without further treatment of the river source water when biologically treated wastewater is further disinfected and measures are taken to prevent faecal pollution within the floodplain area. These outcomes indicate the great potential of protecting catchments from faecal pollution for minimizing the burden on water resources. This information can be used to support the future design of robust water supply systems and thus has implications for water suppliers and authorities.

The QMRA executed in this study was integrated with hydrological process modelling and informed by human MST marker, actual virus measurements from the Danube and dose-response curves for the health assessment. Uncertainty and variability of virus source concentrations and log-removal by wastewater treatment were taken into account by the Monte Carlo process using distributional assumptions. Further uncertainties may be involved as the distributional parameters for wastewater effluent were based on measured virus concentrations from grab samples. The river sample volumes were small in relation to the total river discharge which may induce data errors (Schmidt and Emelko, 2011). This error could be diminished by using improved sampling methods, e.g., proportional auto-sampling over a period of 24 h of wastewater effluent (Mayer et al., 2015) or large river sample volumes. Higher enteric virus reductions may be needed in case of an outbreak. Water managers thus need to be proactive, when planning in future investments in infrastructure for protecting water resource catchments. The outcomes of this study support this proactive planning by demonstrating the effectiveness of further disinfection in wastewater treatment or an improved sanitation infrastructure and the potential to derive robust treatment criteria.

This paper was supported by project 23900-B22 granted to AHF and the FWF (Vienna Doctoral Program on Water Resource Systems W1219-N22) and the GWRS project (Vienna Water) as part of the “(New) Danube-Lower Lobau Network Project” funded by the Government of Austria and Vienna, and the European Agricultural Fund for Rural Development (LE 07-13). This is a joint study effort of the ICC Water & Health (www.waterandhealth.at).

This paper was supported by project 23900-B22 granted to AHF and FWF (Vienna Doctoral Program on Water Resource Systems W1219-N22 ) and the GWRS project (Vienna Water) as part of the “(New) Danube-Lower Lobau Network Project” funded by the Government of Austria and Vienna, and the European Agricultural Fund for Rural Development (LE 07-13). This is a joint study effort of the ICC Water & Health (www.waterandhealth.at).