Disease burden due to gastroenteritis infections among people living along wastewater reuse system in Hanoi, Vietnam 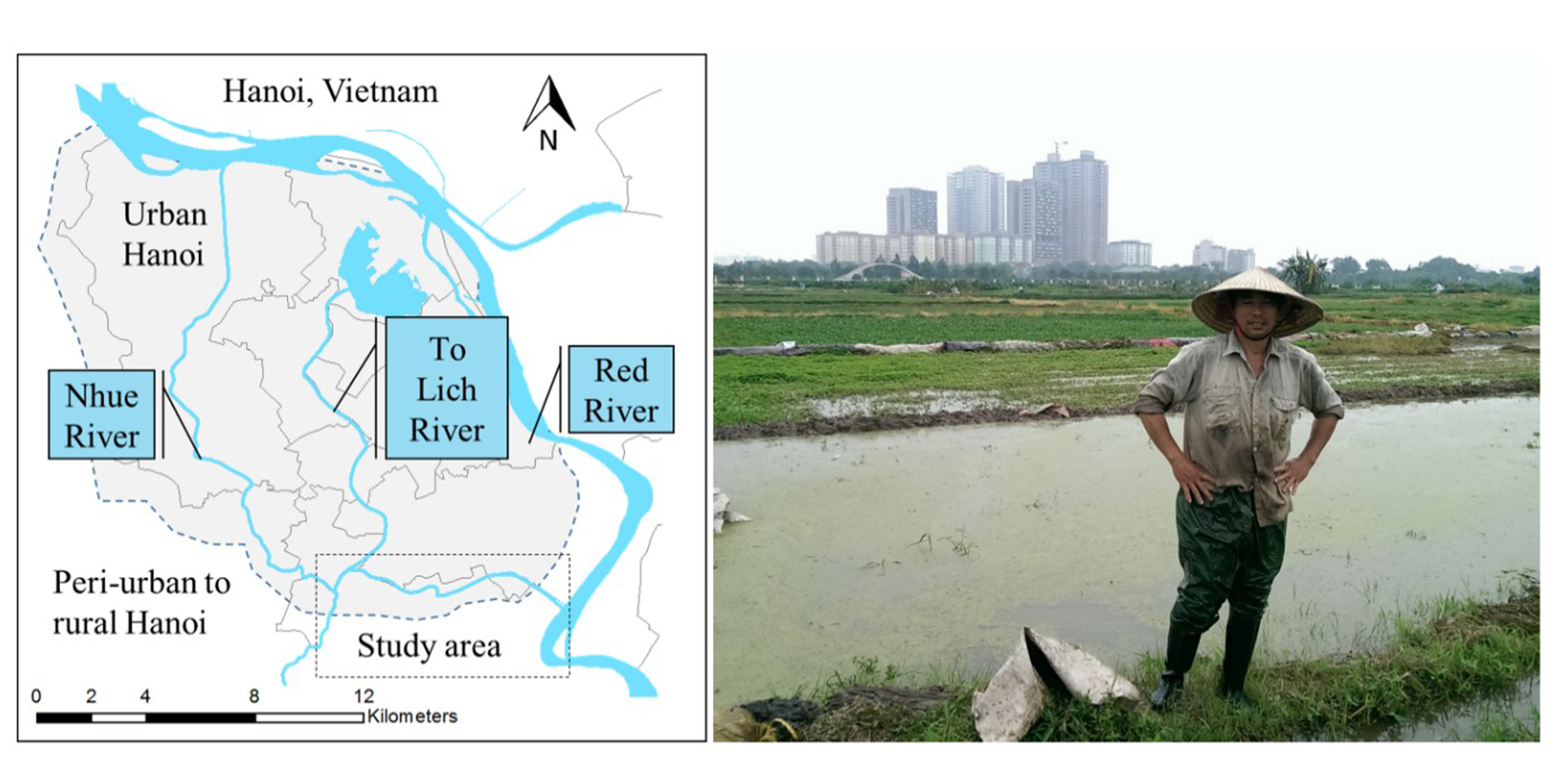 To investigate the safety of people living and working along the major wastewater recovery and reuse system in Hanoi, Vietnam.

The case study was located along Hanoi’s main wastewater conveyance and treatment system, where as many as 700,000 farmers are estimated to reuse wastewater. In the urban and peri-urban areas around Hanoi, wastewater reuse in agriculture and aquaculture creates important livelihood opportunities and is a valuable source of fresh vegetables, livestock and fish.

The disease burden for these different population groups were several thousand-fold above the tolerable risk benchmark. Urban farmers, sanitation workers and rural farmers are at risk for diarrhoeal disease burdens that are 6 to 3 times higher than the estimates from the Global Burden of Disease study 2010 for an average Vietnamese (0.002 DALYs pppy). This could be addressed by:

In Southeast Asian cities, such as Hanoi, large quantities of insufficiently treated effluents contaminate surface waters and soils, resulting in high concentrations of pathogenic organisms and toxic chemicals (Kuroda et al., 2015; Fuhrimann et al., 2016a). This is explained by the fact that most of the 6.7 million people living in Hanoi rely on flush toilets directly connected to septic tanks, that discharge (partially treated effluents) into a complex network of drainage channels. These channels also receive effluents from industries (Fuhrimann et al., 2016c). In addition, faecal sludge from septic tanks is often informally discarded into the environment; in many cases directly into agricultural fields or ponds used for aquaculture (Bassan et al., 2015). In response, wastewater flows have been largely controlled by channelization of the main urban rivers, water gates and sedimentation pond systems to prevent flooding and to treat wastewater before use in agriculture and aquaculture (Nguyen and Parkinson, 2005; World Bank, 2013).

In a recent water quality assessment we found that, despite efforts to improve Hanoi’s wastewater conveyance and treatment systems, water deriving from the wastewater channels being used in agricultural fields for irrigation is heavily contaminated with total coliforms (TC), Escherichia coli and Salmonella spp. (Fuhrimann et al., 2016a). Observed values were up to 110-fold above Vietnamese discharge limits for restricted agriculture and up to 260-fold above the World Health Organization (WHO)’s tolerable safety limits for unrestricted agriculture (Fuhrimann et al., 2016a). Additionally, a cross-sectional epidemiological survey revealed high prevalence of intestinal parasite infections in peri-urban and urban farmers (up to 30%), general communities (up to 10%) and workers maintaining the wastewater channels (10%) (Fuhrimann et al., 2016c). In the aforementioned study, the prevalence of self-reported diarrhoea episodes (recall period: 2 weeks) in adults in peri-urban communities, urban farmers and sanitation workers was 8-12%. These observations suggest that treatment efficacy of Hanoi’s wastewater management system is insufficient in preventing microbial contamination. Consequently, people exposed to wastewater are at risk of gastrointestinal infection. However, prior research does not provide an estimate of the magnitude of the disease burden caused by specific pathogenic organisms (Katukiza et al., 2013; Machdar et al., 2013).

Here we present a quantitative microbial risk assessment (QMRA) with three specific objectives: to estimate the disease burden due to gastroenteritis resulting from exposure to water-borne pathogens along the major wastewater system in Hanoi; to validate model estimates with findings obtained from a cross-sectional epidemiological survey (Fuhrimann et al., 2016c); and to compare disease burden estimates with national and international standards.

The scope was defined through sanitation safety plan testing in Hanoi:

Health outcome: The risk was quantified as the number of cases per year, DALYs pppy and total DALYs per year (according to published burden estimate for gastroenteritis and fatality rates and adapted to the average life expectancy of 72 years in Vietnam (Salomon et al., 2012; Gibney et al., 2014).

A schematic of Hanoi's main wastewater system, with indication of the four exposure scenarios considered in the study is shown in Figure 1.

Figure 1. Schematic flow of Hanoi's main wastewater system, with indication of the four exposure scenarios within the study area (Sflooding, Sworking, SfarmingU and SfarmingPU and potential exposure outside the scope of this study (i.e. contact to Nhue River water and vegetable consumption). (Image reproduced with permission of Elsevier https://www.sciencedirect.com/science/article/pii/S0309170816307850) 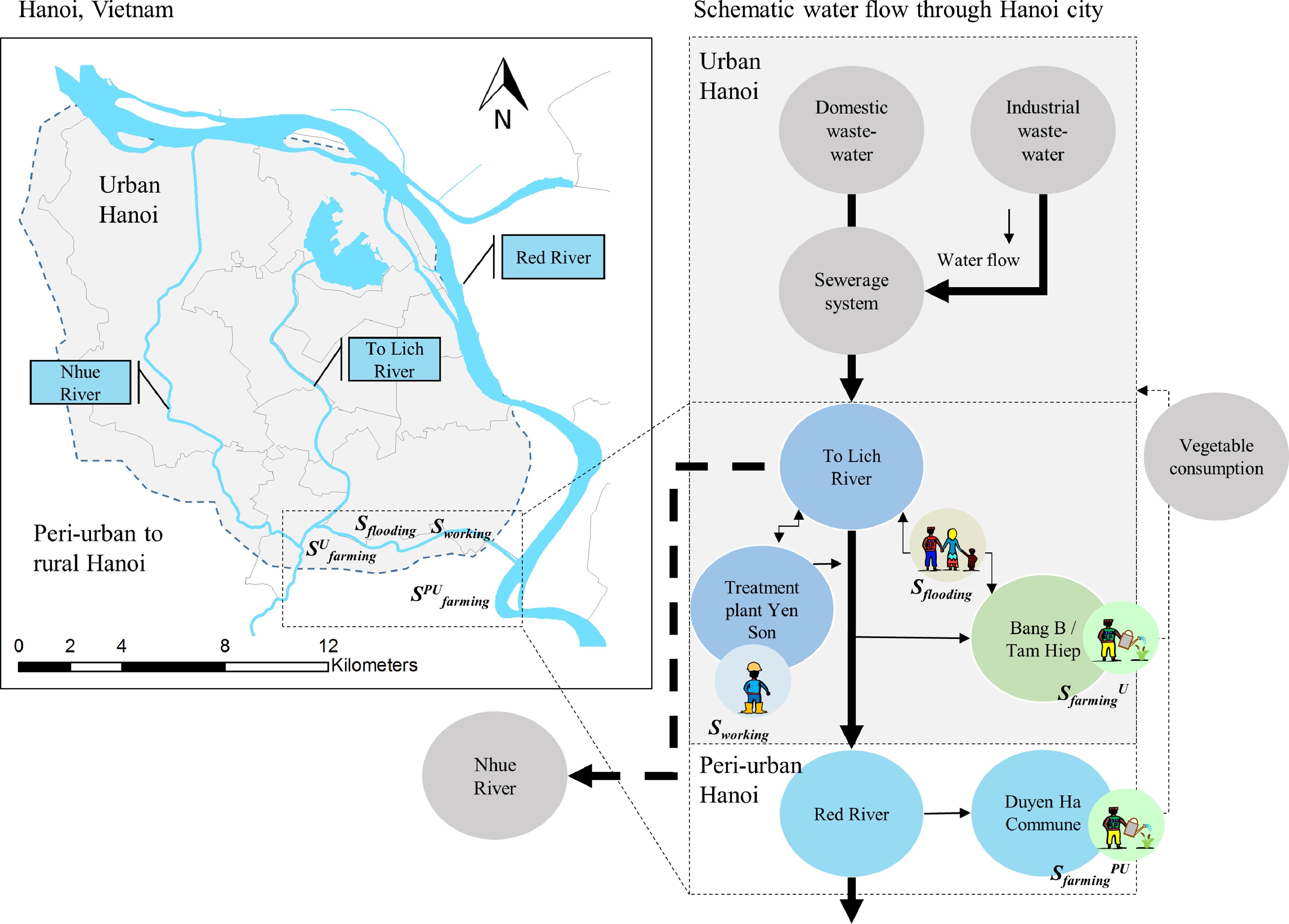 The exposure scenarios included in the assessment are illustrated in Figure 2.

Barriers/controls: The effect of barriers or controls was not included in the assessment.

Exposure: Four exposure scenarios along the three selected study areas were developed and assumptions about exposure groups, number of people exposed, exposure frequency and volume of ingested water were made (see Figure 2).

Exposure to water from To Lich River:

Exposure to water use from To Lich River in agriculture fields of urban farming communes in Hanoi:

Exposure to water used from Red River in agriculture fields of peri-urban farming communes in Hanoi:

The assumptions used for the health effects assessment are summarised in Table 1.

Figure 3. Estimated number of cases, annual incidence of gastroenteritis per year (Inc py), disability-adjusted life years (DALYs) per year (py) and per person per year (pppy); (a) and (b) showing estimates of the respective outcomes per Sflooding, Sworking, SfarmingU and SfarmingPU; (c) and (d) are indicating the contribution of individual pathogens and scenarios, respectively, to the total estimated numbers per outcome along the major wastewater system in Hanoi, Vietnam.
(Image reproduced with permission of Elsevier https://www.sciencedirect.com/science/article/pii/S0309170816307850)

Our estimated gastrointestinal disease burden among urban farmers and sanitation workers who are exposed to wastewater were 5.6- and 2.8-fold higher than the diarrhoea burden estimates for the average Vietnam citizen (0.002 DALYs pppy) (Institute for Health Metrics and Evaluation, 2015), and more than hundred times above the revised WHO tolerable level of 0.0001 DALYs pppy. The high number of cases and the resulting burden due to E. coli, rotavirus and Campylobacter spp. together were estimated to cause most of the disease burden (88%). This study showed evidence that exposure to wastewater around Hanoi has considerable public health implications for these population groups and calls for action, especially to bring down the burden due to E. coli, rotavirus and Campylobacter infections. This could be achieved by:

The model included a range of uncertain assumptions that can influence the quantitative results. A sensitivity analysis of the QMRA model has been presented by Fuhrimann et al. (2016d). There was an effect of different volumes of water accidentally ingested on the risk estimates. Such accidental ingestion may not be very accurate, as it is highly dependent on individual behaviours, which are influenced by age, sex, educational attainment and socioeconomic status (WHO, 2006; Haas et al., 2014). In addition, pathogen to indicator ratios for rotavirus, E. coli and Campylobacter have shown a considerable effect on the total number of gastroenteritis cases. The actual ratio between indicators and pathogens depends on the source of microbial contamination, and this contamination varies between seasons in urban wastewater systems (Ensink, 2006; Katukiza et al., 2013; Fuhrimann et al., 2015, Fuhrimann et al., 2016a). It is important to note that E. coli is excreted by humans and animals continuously, whereas pathogens are excreted only by infected people. This E. coli to pathogen ratio is therefore highly uncertain and will change over time (Mara, 2004; Haas et al., 2014).

Nevertheless, employing a QMRA approach, we found very high risk estimates for urban farmers in Hanoi who use wastewater in agriculture and aquaculture. The measured faecal indicator concentrations, together wtih the assessment of human behavioural practises, were effectively combined and translated into a health outcome metric, allowing for the implications of sanitation related water contamination to be clearly investgated.

Against this background, health-based targets should be set according to local idiosyncrasies after validation with epidemiological findings. For example, as a first step towards setting local targets could be the consideration of estimates provided by the Global Burden of Disease study 2010. These findings are especially interesting in the frame of the Sustainable Development Goals (SDGs), as they address sustainable and safe wastewater reuse and recovery systems, from the point of generation to the point of disposal and (re)use for minimising adverse health impacts associated with water-borne disease, while maximising gains from safe wastewater use in agriculture and aquaculture in LMICs.


The full paper can be found here: https://www.sciencedirect.com/science/article/pii/S0309170816307850
and the related PhD thesis providing a more detailed discussion on QMRA and sanitaion safety planning under follwoing link: https://edoc.unibas.ch/55439/